Last week-end was the Maple Leaf Guild’s annual quilt retreat held at Epworth Forest Campground in North Webster. I had a wonderful time! 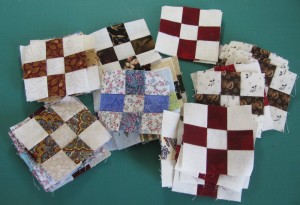 I was tired Thursday and didn’t want to think very hard, so I just pieced these little 9 patch blocks which will finish at 3″. They are made from fabrics leftover from other projects. I try to strip piece as much as I can, but some pieces were just big enough to cut a 1-1/2″ block so I had to do some individual piecing. I actually made more than what is shown, but I had already removed the ‘bright’ ones and put them with a work-in-progress.

I felt more ambitious Friday morning and sewed up the pincushions I have been embroidering this fall and winter. They are from the Patchwork Loves Embroidery book by Gail Pan. My friend Deanna and I filled them with walnut hulls I purchased at a pet store.  I had remembered to bring a funnel along but they still spilled some. After they were filled, I hand sewed them shut. They could have probably used more shells for filling, but I think they look pretty good for a first time. I

I had pieced the HST’s ahead of time so I could get right to work on Red Radiance. I pieced the star points Friday evening. Saturday morning I sewed the embroidered pieces together and then sewed the HST border. This isn’t the finished project, there is an embroidered border (I have 2 sides embroidered) and then another HST border (which I sewed together). Once I’m finished with the embroidered border I should be able to finish it quickly. I already know how I want to hand quilt her, so she will be going in the frame right away. 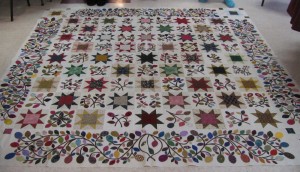 We had a special treat on Saturday, the 2015 charity committee showed us the Relief Sale quilt we members pieced and appliqued blocks for. This is Kim McLeans’ Stars and Sprigs pattern. We have several members who do beautiful applique work so 4 of them each appliqued a border. This quilt will be hand quilted by our guild.

Last August I attended the AQS show in Grand Rapids for the first time. There were beautiful quilts and lots of vendors. I bought a couple kits for small projects but haven’t had time to work on any of them. I brought  Snowman Love along, which I had purchased at the Red Button Quilt Co. booth. I completed the body of the project, but need to do some handwork. I might put this away and save her to finish at the next retreat I attend. 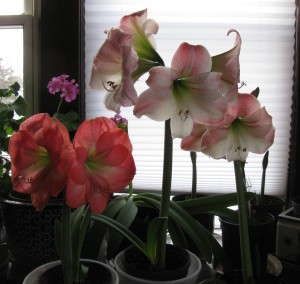 I had two Apple Blossom and an orangey/red Amaryllis bloom while I was gone. Aren’t they just beautiful? You can see there are several more to open in the future. I need these flowers to keep me happy in the winter. I’m pleased that staggering the planting has made the blooming staggered.

For the love of geese
www.laundrybasketquilts.net/blog/
Days Filled With Joy