Since I’m only working on 2 quilting projects, I haven’t been posting as much. I’ve had several of you e-mail me and ask me about how I care for the Amaryllis’ when they’re not blooming. Thanks for the interest, and what a great idea for a post!

For the rest of the winter, keep on like you are doing now. Cut off the dead flower stalks and keep the plants watered, but don’t overdo it. I keep mine in the house until maybe the first of May (sometimes earlier if it is really warm), then I set them outside by my back steps. If temperatures lower than 40* threaten, they are moved back into the house.

When there is no long a threat of frost, I normally transplant them into a flowerbed, but this year they are going to be planted in the garden. Before planting, I trim the leaves to about 6″ from the bulb. I do this because the plant isn’t “hardened” and the leaves aren’t able to stand up to the wind. Don’t worry, they will grow more leaves.

I dig an individual hole for each bulb big enough to hold the dirt from the pot. I do loosen the soil from the potted roots so the roots are free somewhat, but I try not to disturb them too much. Sometimes though, no matter now careful I am, all the soil falls off the roots. Just put the roots in the ground and place the potting soil with it. Push the bulb into the soil and pull real dirt around the bulb until just the tip is sticking out, then I mulch them. You can use whatever is available and whatever you like to use, but please mulch them. Mulching helps hold the moisture in the soil. When the mulch is in place, I give them a good drink of water. I’ll water them every couple of days for a week or two. If it rains, you don’t need to water that day.

If any baby bulbs have fallen off during the planting, go ahead and plant them too but be sure to mark the spot with a stick or something so you can see where they are.

Keep an eye on them over the summer, but they are very self-sufficient.

When fall comes, keep an eye on the temperature. When frost threatens, loosen the soil around them and get them out of the ground. I rinse the roots in water, removing all the soil, then I like to lay the plants on my garden wagon (slotted frame) and leave them there to dry. I don’t cut off the leaves. I set the wagon in the garage and let them dry until usually the middle of November. By now the leaves are all dried up. I cut the leaves off with a scissors and place them in a basket, then store them in the cellar until I start potting them in December.

You will need to adapt this method to your growing area. We’re in the very northern most part of Indiana.

I’ll close with this picture of my beautiful flowers. 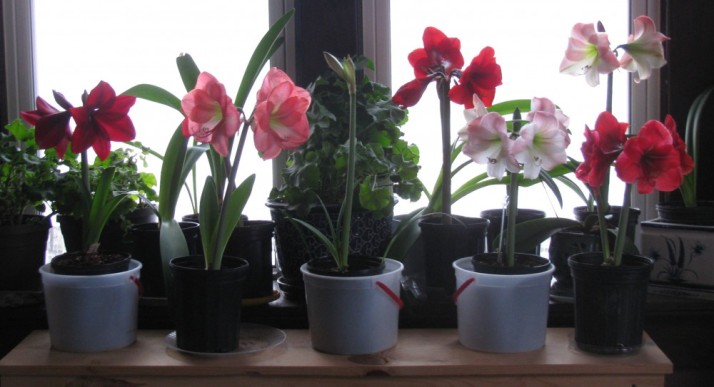 One thought on “Amaryllis Care in the Summer”