Quilting row F has boosted the yards of thread count up to 655 yards. This row was mostly stitched in the ditch, but a few blocks have some different stitching designs. 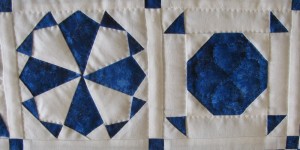 Blocks F7, F8 and F9. I did not want to ditch stitch F7. I used a flower stencil and quilted that design over the top of the star. A second petal extended into the blue border. It is hard to see but I like it! F8 and F9 are both stitched in the ditch.

Block F13 and right side triangle 6. I quilted around the appliqued melons and circles in F13. You can’t tell from the picture, but they puff slightly and look very nice. RS triangle 6 is stitched in the ditch. Triangle 6 was a very interesting one to piece but is really an attractive block.

I also did some secret Christmas present sewing this week but, sorry, can’t show you anything.

Quilting is More Fun than Housework