Last year I did a garden update every month. The weather was uncooperative this year and the garden wasn’t the bright spot it normally is.

Except for the pole beans, the garden has finished production for the year. I plant fall radishes after each section has finished growing it’s vegetable. The radishes suppress weeds and their deep roots loosen the soil for spring tillage.

The Amaryllis bulbs are still growing and one of them is actually blooming, a second plant has a flower stalk too. I’ll let these bulbs grow until the end of September unless frost threatens earlier. They’ll be pulled and allowed to start their ‘rest’ until they are repotted again in November.

On the east end of the garden are these beautiful hybrid sunflowers. They have been transformed into  flowering bushes instead of having just 1 seed head like they used to. I had originally planted a whole row of the sunflowers on the left side but whatever ate my tomato plants also ate most of those seedlings. I had used all my seed so I went back to the seed store. They were out of the original variety

so I got another type. I think they’re even prettier.

The bees enjoy them too. There have been bumble bees, honey bees and some wild type of bee that looks like honey bees but are half the size.

I enjoy looking out the west windows of the house and seeing them so bright, colorful and cheery. 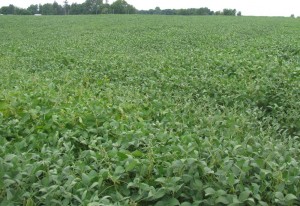 The soybeans are nearing the end of their growth. It is hard to imagine, but a month from now, this field will have yellow leaves with some of them turning brown and starting to drop off the stalk. If we have a normal (what’s normal anymore?) fall, they should be harvested in October.

After they are harvested, we’ll no-til winter wheat into the soil. 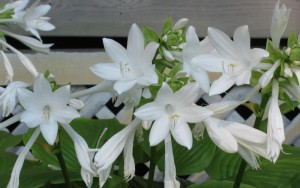 My flower beds aren’t very colorful anymore. The black-eyes Susans are still smiling but the most brilliant flower this late summer time has been the lily hostas. The early summer rains really made them grow, their flowers are beautiful. When I head out to the barn in the early morning, the scent of their sweet perfume is hanging in the air. It is too dark to see them, but they definitely let you know they are there.

In July we combined the wheat in our bottom field and baled the straw the following week. A combine can’t harvest every single seed grain so there are wheat kernels dropped to the ground. There are 3 wild turkeys who have been grazing the field ever since the combine did it’s job. They were there when we started baling, waddling ahead of the tractor eating the seeds. I would love to get a picture of them for you but I don’t have a telephoto lens on my camera. As I am typing, I am looking out the east window at them. They are determined to glean every loose seed in that field.

As we baled hay this week, the barn swallows gracefully flew and swooped around us; devouring the insects we disturbed. I’d take pictures to show you, but I’m not fast enough to snap one. I don’t know how much longer they will stay in northern Indiana before heading south. My bird book says they winter from Costa Rica to Argentina.

I did manage some sewing time this week, but I’ll share that with you in my next post.

Several months ago, I showed you some quilt blocks I had embroidered years ago. They were sewn together and the quilt needed to be wider. I solved the problem by adding two side borders with flying geese, then a blue border, then a checkerboard border, ending with the blue fabric for the outside border. The top now measures 90″ x 98″, decent size for a bed.

The center blocks have yellowed some over the years. I plan to hand quilt this top someday, maybe by the time she gets quilted, the white fabric I’ve used will have yellowed too.

Linking up with Kathy’s Slow Quilting on Sunday and then on Monday Super Mom-No Cape. On Wednesday I’ll link up with Esther’s Wow, then on Thursday My Quilt Infatuation.

Summer is flying by and it is a very busy time here on the farm, but I have made some time for sewing. 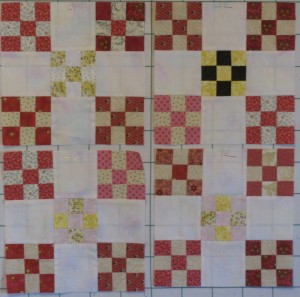 I’m well on the way to recovering from my Jane burnout. I’ve progressed from just sewing strips together, to sewing the 3″ finished 9-patch blocks I pieced last winter into double 9-patches . . . 42 double 9-patches. These are block A for the Cherry Blossom Quilt.

I’ve pieced the centers for the

for the 30 B blocks. One inch finished HST’s are to be attached next. I have the Thangles ready to sew but it is going to take a while to sew the 600 HST’s needed.

The Cherry Blossom Quilt pattern was designed by Karen H. and you can find the pattern on her blog, faeriesandfibres.blogspot.com. Click on Patterns by Karen H. (She asks that links go directly to her blog.) She has some very pretty patterns she has designed.

The bindings are completed for the 4 little quilts I’ve quilted this summer.

The little Snowman Quilt is a kit I bought a year ago at the Red Button Quilt  Co. booth during the Grand Rapids AQS show in August. He measures 16 1/2″ x 19 1/2″. The middle two were projects from the Prairie Women Sewing Circle, year 3. I especially like the cheddar flange binding on the cheddar and black quilt. The cheddar/black quilt measures 25″ x 29 1/2″. I thought the next quilt was red and black but now I see the red doesn’t stand out as much as I thought it would. I should have added a red flange to the binding. The red/black size is 21″ x 25″. The right quilt was a free pattern from the Temecula Quilt Co. called the 12 Days of Christmas. He measures 18″ x 22″.

The backsides of the 2 left quilts. Both were hand quilted. 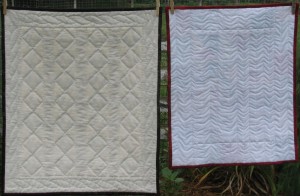 And the 2 quilts hanging on the right side. The left one was hand quilted and the right quilt was stitched on my sewing machine. I was too lazy to attach the even feed foot to my machine so it is not smooth. But that just makes it an interesting texture.

I decided I was going to use purple fabrics to piece the Seeing Stars BOM by Turning Twenty. I had planned to use a mixture of regular fabrics and batiks but when I started looking, I decided to go with just batiks. It’s amazing what beautiful fabrics we can find in our stashes if we just look. Some of the batiks look blue but have some purple shading in them.

Seeing Stars is a 6 month BOM with 2 patterns coming a month. I’ve downloaded the first 4 patterns but I’ll wait to start until I have the next 2 patterns. I’ll have a busy week of piecing the blocks, then put it all away until I have the rest of the patterns. BOM’s are fun but they get too draggy sometimes, at least it seems that way to me. I’m more of a get ‘er done sort of person.

The 1-1/2″ strips I have been sewing are sewn. Now I’m sub-cutting them into twosies. It doesn’t take long, I use my mat with the 1/2″ slits, then I’ll sew them together and make 4-patches. This is going to be a very slow, very long-term piecing project. After I get the 4 patches pieced, I’ll decide what is next. I have several possibilities I’m turning over in my mind.

Linking up with Esther’s Wednesday WOW! and My Quilt Infatuation NTT and A Quilting Reader’s Garden.

Several weeks ago, I pulled out the resale shop crib quilt to work on in the evenings. I finished the applique, then I removed the green embroidery and re-embroidered the alphabet with a lighter green color. It didn’t make any difference, it still looks teale colored. I also embroidered the pink outline.

Earlier I had sprayed water on a section to see if the ink disappeared, it didn’t. So this is an old top that must have been printed 30 plus years ago. Back then they used permanent ink. Why? I don’t know but they did. Anyway, I think the blue ink makes the light green embroidery thread look more teal and it doesn’t match the green applique ribbon.

I asked DIL #2 what she thought. The greens didn’t bother her, but the ink did. Funny how we all notice different things. I had planned to add a border on the outside but she suggested just leaving it like it is, so I did. This winter I will attempt quilting it on my sewing machine.

Then I pulled out the pink hexies I started months ago and I’m hand sewing more of them. They will end up in a crib quilt too. People keep on having babies and I like having crib quilts ready to go for gifts.

Neither of these crib quilts will be WOW! quilts, but they will be loved and used. Nothing is better than that.

I’m linking up to Kathy’s Slow Stitching Sunday and then on Monday I’ll link up to Super Mom – No Cape! Stitchery Link Party.